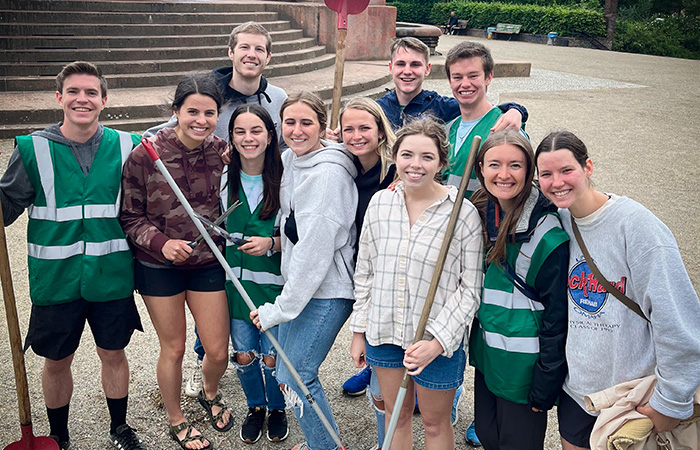 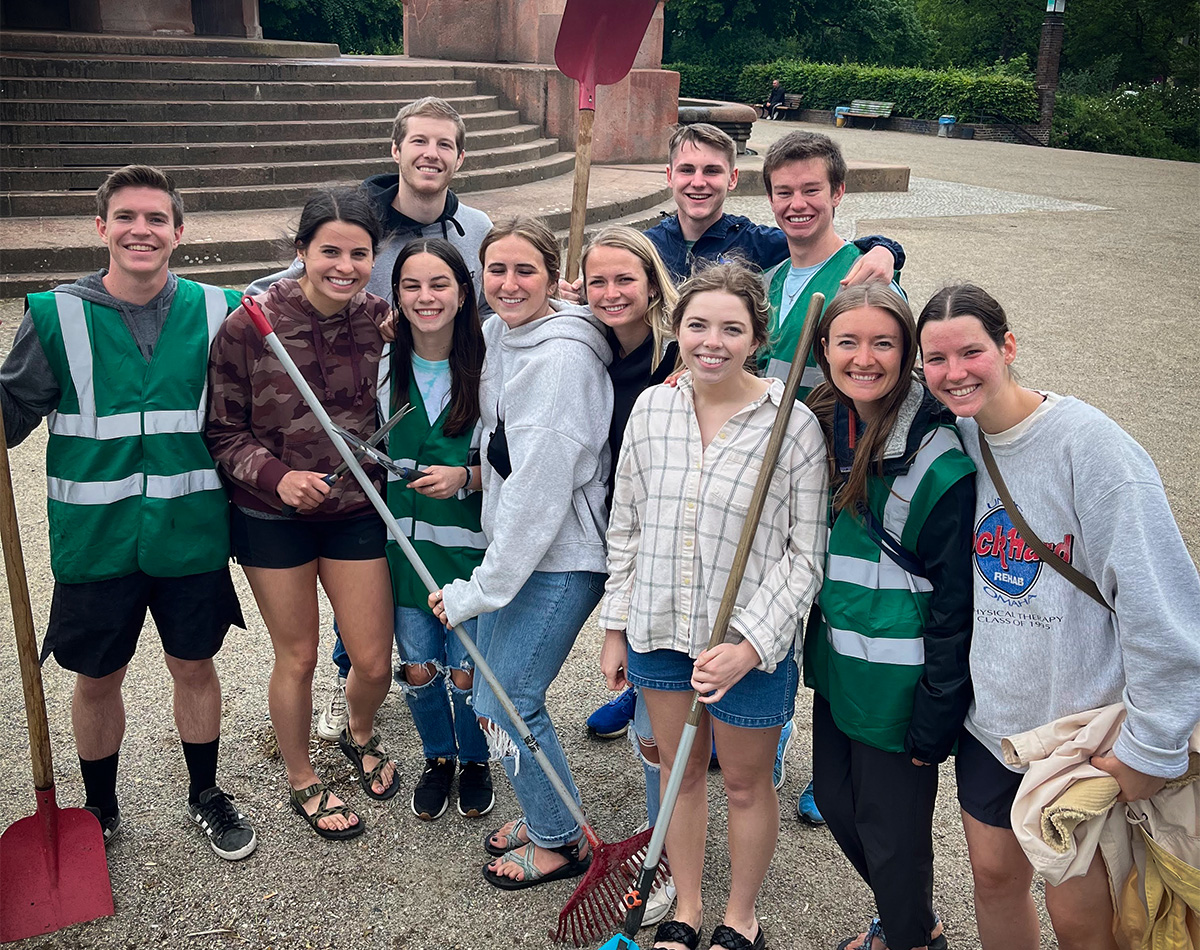 Sophie Thune is a planner. She can prepare for and anticipate most things. She knows where she comes from and where she’s going in life. She can’t remember a time when she didn’t know she was loved by God and saved by Jesus Christ. Two years ago, under the burden of shame and insecurity, Sophie realized that her faith was not her own and it was time to take responsibility.

“You don’t inherit faith from your parents,” Sophie shared, “My parents are so faithful to the Lord, and I don’t know where I would be without them. But even with that solid familial foundation, I had a lot of insecurity stemming from an incredibly legalistic theology. I’ve now realized that I was trying to get to God based on my effort. I thought that I could ‘do enough’ or ‘be enough.’ I believed that it was up to me to get to God.”

As a young girl and going into high school, Sophie thought that in order to be faithful, she had to rely on herself. Life became overwhelming. Every day, she sensed that she had to do everything right to please God. This left her in a constant state of unworthiness, as she felt that God was disappointed because her works weren’t enough. High school was a hard and dark time. Sophie had a head knowledge of grace and love, but her heart was far from accepting that for herself. 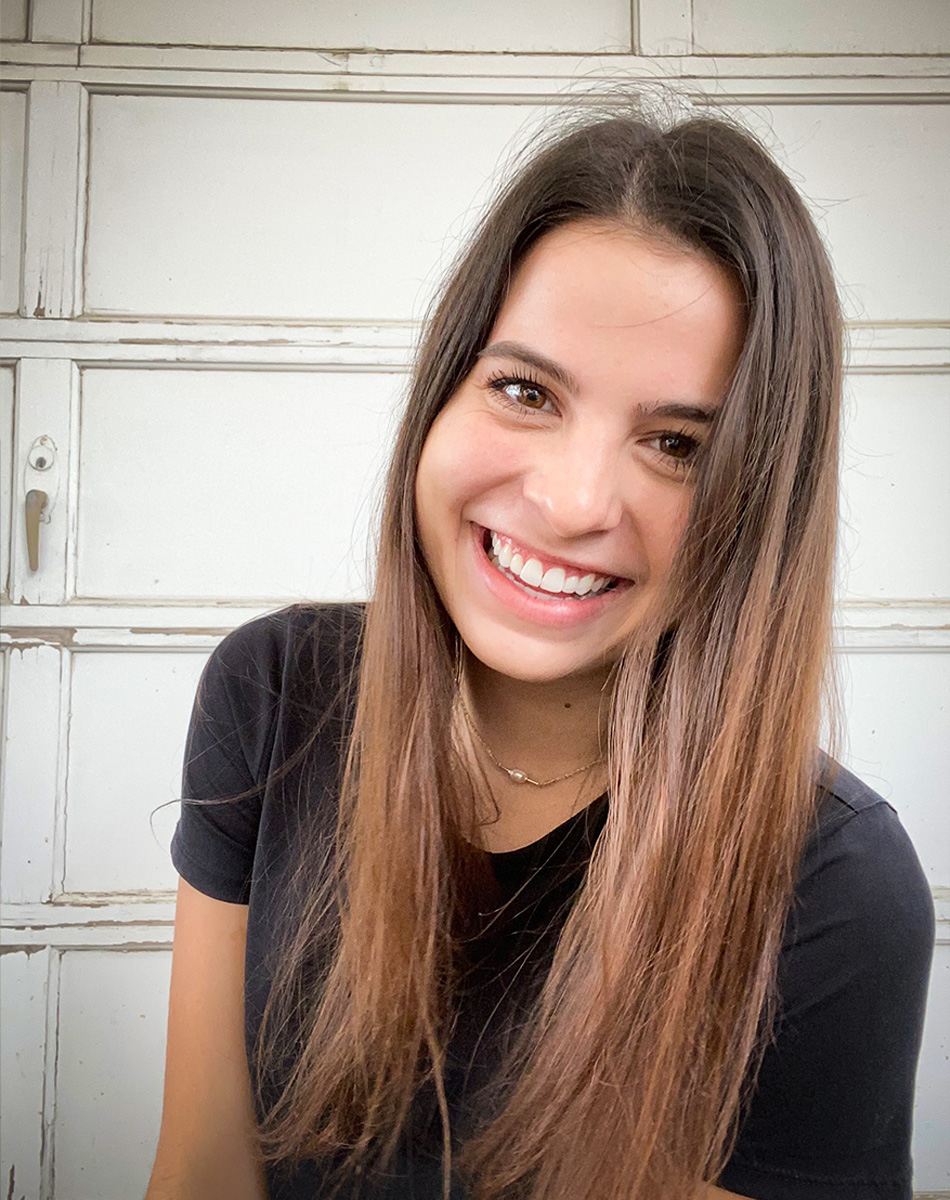 Launching into college, Sophie was hungry for people her age who loved the Lord. She was surrounded by older adults and kids who loved God, but she desired a community that reflected her stage of life. She attended the Salt Company, Citylight Omaha’s college ministry, at the invite of a friend during her freshman year. Immediately she got plugged in and took the Gospel 101 class.

“Taking that class changed everything,” Sophie shared. “I’d heard about the gospel for my whole life, but the narrative that I believed internally was far from the truth. I was so lost in legalism. I thought I knew who God was, but my view of Him was so distorted. It took that class, that weeks-long deep dive into the gospel, for me to realize everything I’d been missing."

“Now I’ve come to understand that it has nothing to do with me. It had to start with Him. God loved me first, and that truth opened me to the fact that He accepts me right where I’m at, but he doesn’t want me to stay there. Because of that, I can be free from the voice inside of me that tells me I’m not doing enough, and instead I can rest in the fact that I’m loved as I am. I’m saved once and for all, but the gospel continues to impact me and change my life daily. It’s not a one-time truth; it’s an everyday reality. How I see myself, others, and God has all changed. The Lord was like a dictator to me, always disappointed in my inability to measure up to His standards, and suddenly I saw Him as this loving Father who sent His Son to atone for my sins so that I could spend eternity with Him. And now, because of the Spirit living in me, I have the power to change, and I have this whole new concept of grace and love.”

Sophie was free, and surrounded by a college community that wanted to support and encourage her on this new path. During her sophomore year, Sophie randomly heard of an interest meeting for summer mission trips and decided to attend. She had no intention of going on a mission trip.

“I thought I was too busy to make that commitment, especially with my summer,” Sophie described, “but at that meeting, I distinctly remember one of the directors saying that you’ll always be too busy unless you choose otherwise. The reality is life will only get busier, and the college years are the best time to go on a trip like this. I immediately thought ‘I can do this,’ even though I’d never been out of the country. I could do it in two weeks, I could sacrifice two weeks for that... so, I filled out the form. There was a lot of doubt about fundraising, about covid, about where I was going... but, then again, I don’t actually know where life is going, I’ll just get busier, and I can’t act like my agenda is the ultimate determining factor in whether or not I can follow the Spirit’s conviction.”

Sophie was accepted to go on the Thailand mission trip, and she began to support raise soon after. She was fully funded months before the team was to leave. About six weeks prior to their departure date, the team got word that restrictions due to the pandemic wouldn’t allow them to go to Thailand, and their location was switched to Germany. Sophie was shocked.

“We’d spent months preparing for a specific culture and raising support for a specific mission,” Sophie described, “and then I was completely unfamiliar with where we were going. Here everyone thought I was going to Thailand and financially supporting that trip, and suddenly it’s changing to Europe. I didn’t understand why we were going to Germany, because it’s such a touristy destination and it doesn’t feel like there’s as much of a need there. It felt like I was betraying everyone who funded me.”

Sophie remained committed and left with the team this past summer for two weeks in one of Germany’s biggest cities. After being in Germany for a just a few days, every assumption Sophie had was turned upside down. 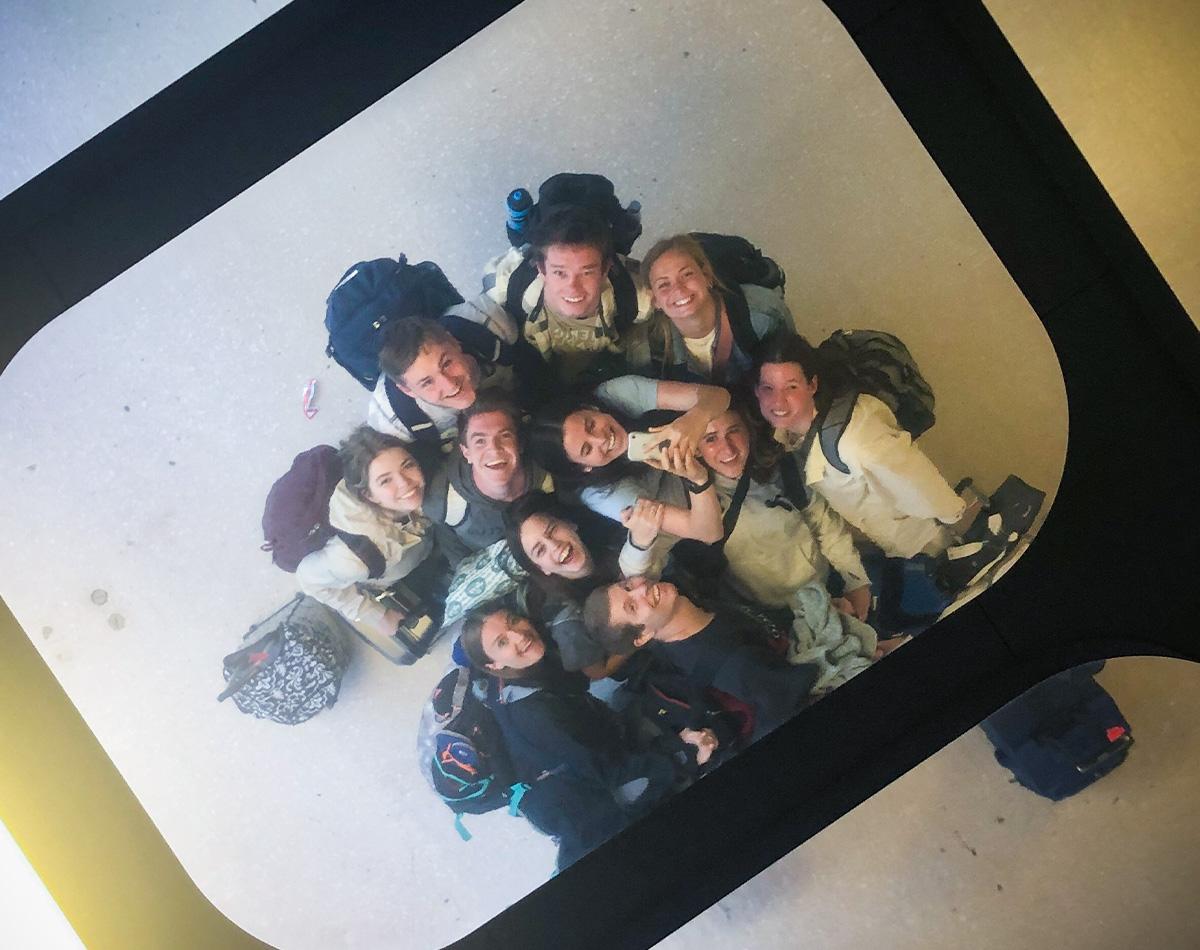 “Our leaders were super intentional in telling us, regardless of where we go, we are going to evangelize. And the gospel is needed wherever we go. Come to find out, less than 1% of the people living in Berlin attend church on Sundays. I just didn’t expect that with all the tourists and beautiful cathedrals and church history. I expected it to be more religious.”

There was now, for Sophie and the team, a sense of urgency and purpose. It’s not just third world countries that need to hear about Jesus, but everywhere. People all around the world who live in their own bubble walking around with blinders need to be freed from the chains of individualism and sin. Sophie and the team also learned something vital. Global mission is about connecting with and gaining an understanding of the people you are going to.

“We did a lot of just learning about the history and culture there,” Sophie revealed, “you must be versed in that to understand and minister to people. The team there explained that when you’re in America and you’re sharing the gospel, you typically begin with acknowledging sin and the depravity of man. Most Americans need to realize their brokenness apart from God to see the need for the gospel. For people in Germany, they often experience deeply rooted guilt and depravity already, and therefore need to hear about God’s love first. That’s what reaches them. Coming from America, sometimes evangelism feels like a numbers game. I had to let that go. The humbling reality is that all of this is the Lord’s work and not mine. I saw people for people and souls as souls. One at a time. This is the work of Christ; this is someone He loves deeply, and I want to love them how He loves them.”

Sophie also learned that God could use anyone for His purpose. He can send people to certain places in the world, and He provides what is needed to make that possible. Sophie was blown away and described her revelation with the following:

“I learned that my personality is not a detriment to the mission of God. I was insecure and often just wished that I was wired a different way. I thought that if I wasn’t assertive with people, then I wasn’t fulfilling my potential as a disciple. I realized quickly that the people there in East Europe operate slowly with people, and that is how I’m wired! I’m slow with relationships, with getting to know a person and their story, determining how the Gospel affects them and what aspect of the Gospel can touch them... and that is okay! That is being intentional. It’s hard to talk about the Gospel and it isn’t natural to talk about it, but God will use the effort that you give toward it. God can and will use me. I must trust in that instead of forcing a personality that is not mine, or being discontent with how I am.” 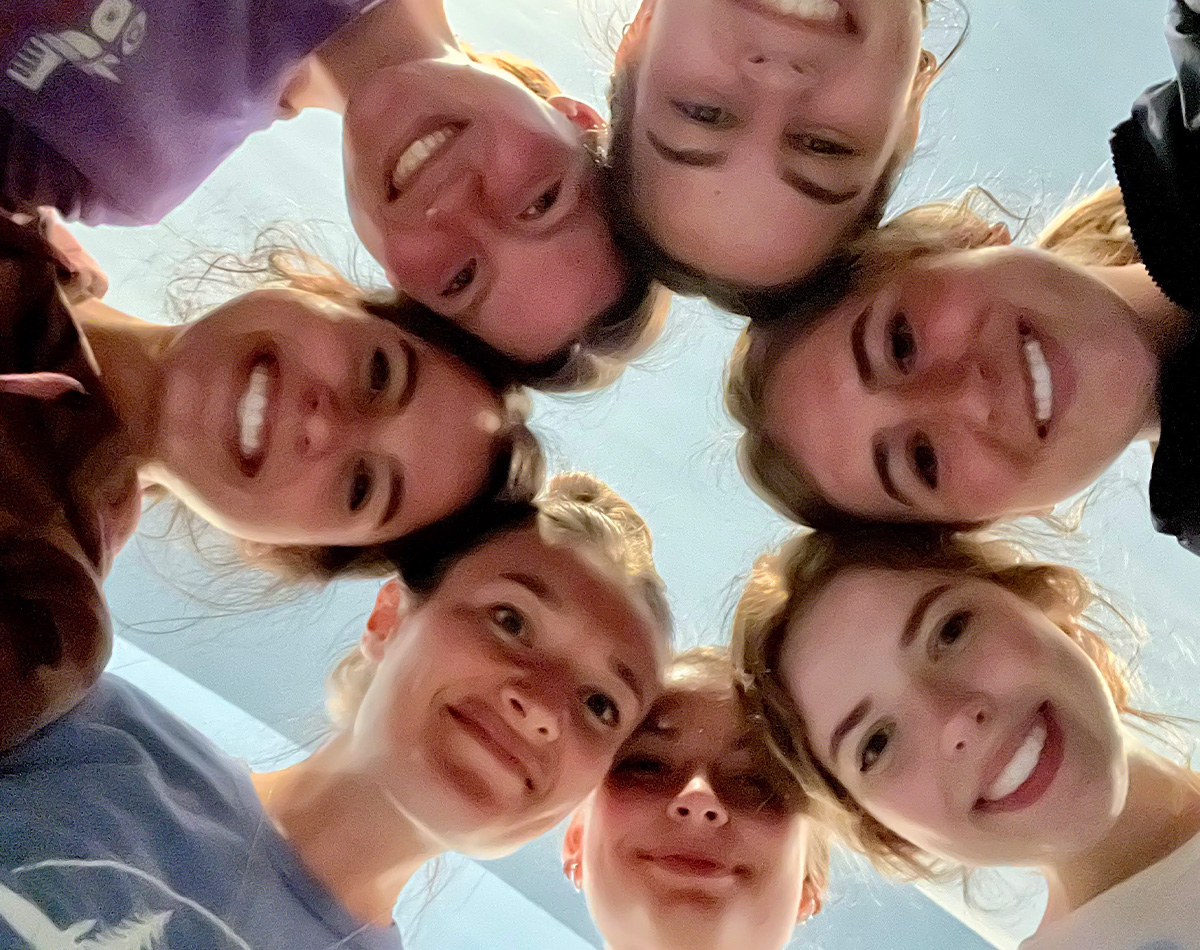 A global mission trip changed Sophie forever. Her hope is that everyone will go and serve people somewhere in the world, and in their own neighborhoods. We are not meant to live in our bubbles, we are not meant to feel bigger than we are, and we are all called to ‘go.’

“There is so much growth that happens when you step outside of your normal and go somewhere where everything is different down to the language,” Sophie said with a big smile on her face. “It’s a humbling experience. The Lord teaches you so many lessons and grows you in so many ways. There is so much to take back home and to share. You might even start to wonder if you are called to global missions for the rest of your life. You won’t know until you step out and try. I was definitely intending to live here in Omaha forever, but after going to Germany I wonder if God’s will is different. Maybe I’m called to live in a different country! Seeing people who have done that and being there myself, it is such a beautiful thing. If it’s God’s will, then that is what I’ll do.”

We follow Jesus today because He has been relentlessly faithful to pursue and redeem the foreigner, you and me. And now He invites all of us to join with Him on His Mission to redeem all nations! So as a church, we GO and serve alongside our global partners in the Mission He has called them. Please pray and apply to our Global Engagement Trips! Application deadline for summer 2023 trips is in December. https://citylightomaha.org/global/go/