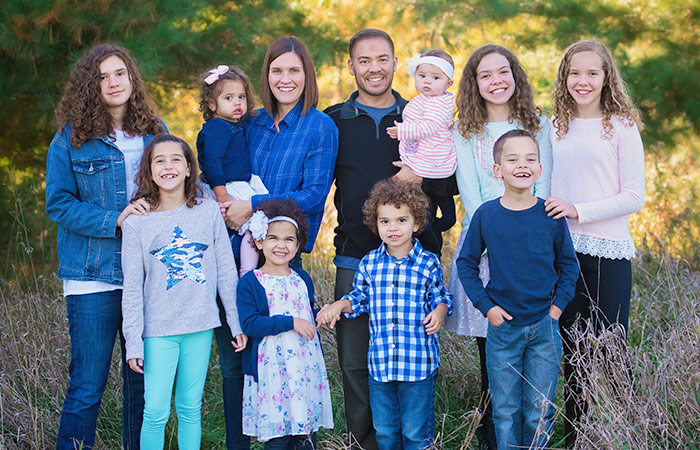 Paul Hakenkamp is a father of ten children, one of which is still attached to mama, and husband to a wonderful wife named Mandy. Paul and his family are an active part of Citylight Church at our West location. Christ got ahold of Paul at the tail end of college, thank God. In the last year Paul has gone through depression brought on by Obsessive Compulsive Disorder (OCD). Paul has likely struggled with OCD for some time however didn’t really understand what it was. God has given Paul a heart for those who struggle with mental health conditions and a desire to inform the church and unbelievers about God’s provision and goodness for the mentally ill. Paul’s prayer for this blog is that it will point people to Jesus, it will help de-stigmatize mental health, and it will encourage the church to take a more active role in this battle.

Mental Illness: A Journey Into the Desert

Is mental illness a real sickness? I’d like to begin to shed some light on this question. Without experience or knowledge we could all potentially reduce mental illness down to some sort of character flaw. Or even more damaging that a person just doesn’t have enough faith. This is a lie, and the enemy pushes this lie even further by dousing mental health afflictions in shame and stigma.

John 8:44 says about the enemy “…When he lies, he speaks out of his own character, for he is a liar and the father of lies” .

God has not only taught me that the shame and stigma are lies, He is helping me have a heart for those who have been afflicted.

Like many I had very little experience and flawed knowledge when it came to mental health. I could never imagine being so depressed that I had no hope. I thought that depression was more of a ‘choice’ rather than an actual illness. Worse yet I could bring myself to think that some were just going crazy. God has unique ways of helping us understand our own weakness and reliance on him. You see, about nine months ago I thought I was literally going crazy. I thought I had to be the worst person in the entire world. As painful as this was and still can be, I praise God for it. I believe He led me into the desert to speak with me:

“But then I will win her back once again. I will lead her into the desert and speak tenderly to her there. I will return her vineyards to her and transform the Valley of Trouble into a gateway of hope. She will give herself to me there, as she did long ago when she was young, when I freed her from her captivity in Egypt.” Hosea 2:14-15 NLT

We all know somebody who is a little OCD, right? Sock drawer perfectly organized. Always washes their hands before dinner. Car always perfectly detailed. That’s OCD, right? Or is it? Do you know anybody who has thoughts that they are going to cause harm to loved ones in some horrible way? Or do you know anybody who can’t stop blasphemous thoughts about God? Not the OCD you were thinking about? OCD is a disorder of the brain characterized as intrusive thoughts that cause much anxiety followed by compulsions aimed at relieving the anxiety. The obsessions and compulsions are ultimately a lie. Compulsions may temporarily relieve the anxiety, but they feed the beast and give it more power. OCD typically targets what is important to you. It’s not just about washing your hands over and over again. It’s that if you don’t do that, you will somehow poison yourself or loved ones. My name for OCD is the “devils autopilot”. Although labeled as an anxiety disorder OCD has two main characteristics. Doubt and Guilt. According to beyondocd.com:

OCD can make a sufferer doubt even the most basic things about themselves, others, or the world they live in. I have seen patients doubt their sexuality, their sanity, their perceptions, whether or not they are responsible for the safety of total strangers, the likelihood that they will become murderers, etc…..Doubt is one of the more maddening qualities of OCD. It can override even the keenest intelligence. It is a doubt that cannot be quenched. It is doubt raised to the highest power. It is what causes sufferers to check things hundreds of times, or to ask endless questions of themselves or others. Even when an answer is found, it may only stick for several minutes, only to slip away as if it was never there. Only when sufferers recognize the futility of trying to resolve this doubt, can they begin to make progress.

OCD generally presents at a younger age. Early identification can give a person the knowledge needed to treat their condition. My earliest memory of OCD was when I was probably between 7 to 10. I thought that some masked people were out to get me. I felt that if I allowed my parents, particularly my dad to touch me, that they would be able to get me. So my compulsion became avoiding touch from my parents. Ultimately this led to further complications as you can imagine. Now, it is possible and likely that there is a strong spiritual element to this as well. We’ll go into that in a later post. As I got older it morphed into other areas. I would constantly think that I would die unless I went to bed after midnight. Luckily that was mostly in college! Sounds a bit crazy, right? Well that’s how it feels to the sufferer. They know that the thoughts are false, but for some reason their brain is making them feel as if they are true! This creates anxiety that you need to relieve somehow. If you are interested in the science of OCD read what the International OCD Foundation says.

I didn’t realize I had OCD until recently. When I was 24 I asked Jesus to be in my life. I was a ‘lukewarm’ Christian until last year. I made a decision to follow Him with all of my heart, mind and soul. I repented of my sins. God began to do a work in me. Many things changed in my life for the better. Then OCD started to attack my faith. It first presented as intrusive thoughts about if I really believe in Jesus, mostly when I read the Bible or prayed. “You don’t believe that!” “You don’t confess Jesus!”. Then it moved to if I had committed the unpardonable sin. Then it turned into blasphemous thoughts over and over again in my head. The thoughts even tried to accept the enemy as my lord. My compulsions were to constantly check my faith at first. It was to see what the Word and the community had to say about these things. Then it turned to avoidance of anything to do with my faith. A simple Bible laying on the table created anxiety for me. I dared not bring on the intrusive thoughts. My wife, Mandy, would help by sitting next to me, holding the Bible and pointing out scripture for me to read. I would spend days in obsessions disengaging from work, family, and social activities. I felt like I was better of dead because of the extreme shame and hopelessness. I thought I was going crazy. Worse off I didn’t want to confide in anybody about my thoughts for fear of condemnation.

OCD has taken me to some very dark places. But God is faithful! I believe this. I believe that the enemy has tried to use this disorder to destroy me. I believe he is trying to do this to get to my family. The enemy may be cunning, but he is no match for God! God has used this affliction to truly build my faith and understanding about who He is. God often uses hardships to do this. As I write this, I am still in this season.

“But the pot he was shaping from the clay was marred in his hands; so the potter formed it into another pot, shaping it as seemed best to him.” Jeremiah 18:4

My jar may be broken and have a hard time holding water. But I trust that God has the best for me in mind. He can remake me. My hope, my only hope is in Jesus and his promises to us. After living all of this I have started to truly realize it is all that I really have. I’d love to tell you about how God has been faithful in another post. It’s literally not just one or two things, it’s been a tremendous amount.

Friends, mental illness is true sickness. We are a compilation of mind, body and soul. It is often unseen as there are not many visible signs. It is further unseen because the sufferer has little desire to admit these types of things to others for fear of being outed as a horrible person. We, the Church, can be an agent of change for this. We can become educated, we can gain experience.

As I write this there is presently no cure for OCD. It can be managed through medication and cognitive behavioral therapy. I believe the true and only cure for it is Gods grace and the perfection of Jesus.

“There is therefore now no condemnation for those who are in Christ Jesus. For the law of the Spirit of life has set you free in Christ Jesus from the law of sin and death. For God has done what the law, weakened by the flesh, could not do. By sending his own Son in the likeness of sinful flesh and for sin, he condemned sin in the flesh,” Romans