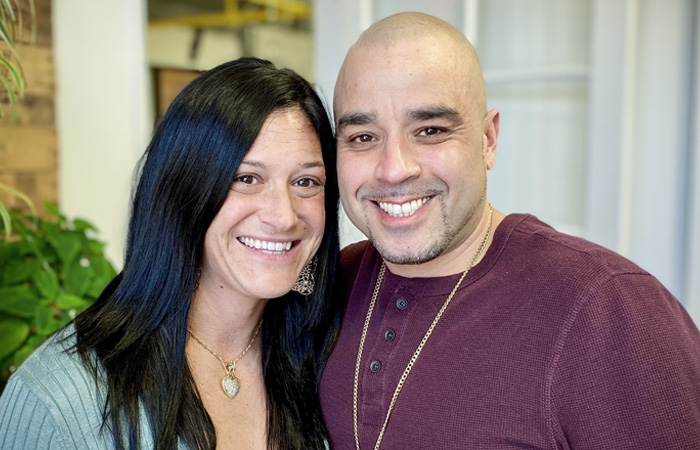 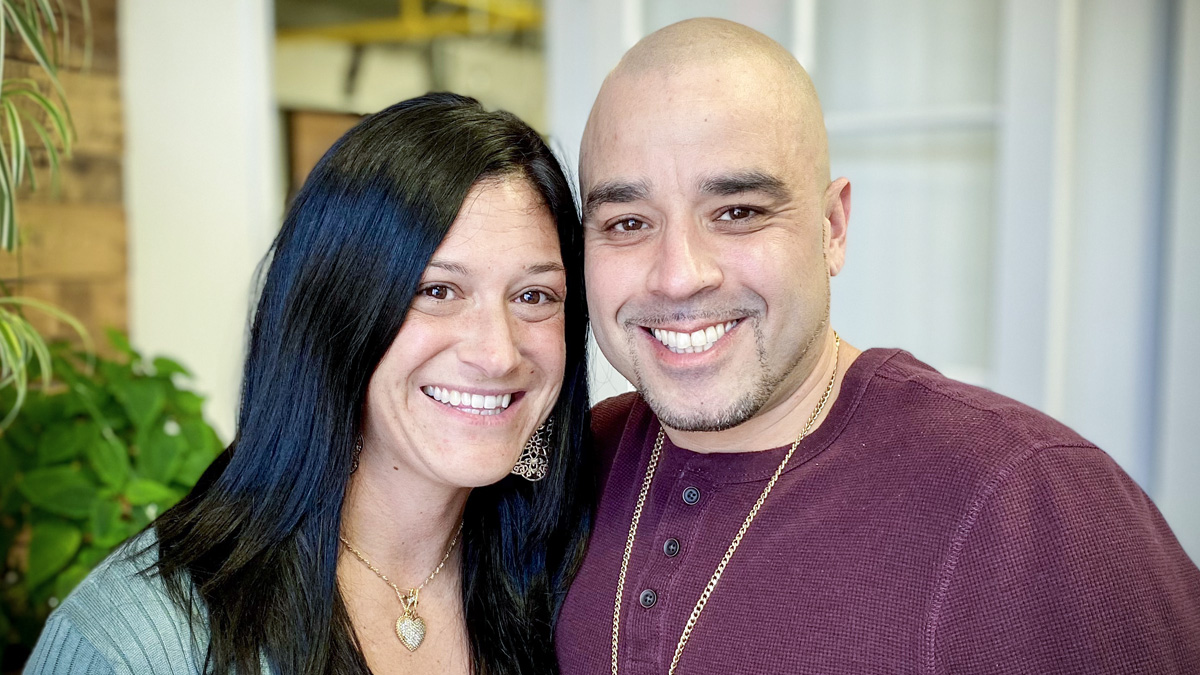 “I used intravenous for the first time ten years ago,” Dom hesitated for a moment. “I remember looking up at the light in the ceiling and I knew I crossed that line. I hit bottom.”

“And I remember saying to myself I can’t do this by myself. I’m miserable at it. I need help.”

Soon after this, after Dom had been up high for ten days, a detective pulled up beside him on a street and arrested him. All Dom could think of at that moment was relief that he had been caught.

“I’ve been looking for you for 15 years,” Dom remembered saying to the cop.

Soon after Dom was on pre-trial for drugs and distribution and sentenced to a long term in prison. There was other trouble going on in the family. Dom was separated from his family and from the women he lived with. His children were heart-broken because they were losing their daddy.

As he was exiting the courthouse, having met Meg a few years prior and always thinking of her from time to time, he saw Meg out of the corner of his eye. Meg at the time was a probation officer. Dom was completely caught off guard and wondering if it was a sign.

“In that moment, I knew Meghan was in my future,” Dom quietly shared.

Before Dom went to jail and by the grace of a judge, he instead began a long journey of programs to get sober and clean. Because of that, he was able to serve only a fraction of his jail time.

That day in the court house, Meghan was waiting for a parolee that was assigned to her. She was also startled to see Dom but felt a tinge of remorse and a whole lot of anger.

“I had blocked him for years,” shared Meg. “He was trouble and I didn’t want anything to do with him.”

Meg was married to her second husband at the time and was pregnant with her son. She had her own list of problems that kept her in a world of darkness. In a sense, Meg too was living a lie. When she divorced her second husband she found herself medicating with prescription drugs and drinking to dull the edge of pain.

Soon after, she found herself moving in with another man. Her anxiety and depression were her constant companions and continued to point her to a deeper darkness.

“I was so broken and so lost,” Meg reminisced. “I found what I thought was acceptance of myself through men, people, and through drugs and drinking.”

However, no matter who the boyfriend was at the time, or if other people thought she was acceptable or not, Meg found herself trying to better her life…over and over. Those things nor those people ever gave her the confidence and love she was so desperately craving and yearning for.

A few years later, Dom was released on probation and found himself going back on all the promises he made in jail.

“That was because that is what I knew even though I didn’t want it,” Dom shared with sorrow. “I felt comfortable with being that bad boy.”

About a week into probation, Dom found himself searching for Meg and then reaching out to her. Very quickly they began a friendship and Dom found himself wanting to make this time different. He invited Meg to church. Dom had been attending Citylight on and off and he knew he wanted something different with Meg so they met at Midtown.

“I felt accepted immediately,” Meg said with a smile when thinking about the first time walking into Citylight. “Even though we didn’t know anyone. We sat in the back and I just cried.”

“Going to church with Meg and at Citylight felt natural,” Dom replied.

That day four years ago was the beginning of another long journey for their relationship with one another and with God. There was first a season of unfaithfulness, separation, lies, deceit, fighting, and pain. And then during a cancer scare for Meg, they got back together and never looked back.

“God had to rip everything away from me,” exclaimed Meg. “Men, a broken relationship with my parents, and then having to go through surgery with a possible cancer diagnosis made me turn away from myself and what I depended on.”

“That was the turning point for me.“

Meg had believed all her life that she was worthless and undesirable. For Dom, it was the voice in his head telling him over and over that he would always be a failure and abandoned.

Last year, having lived together for a few years and now engaged, Meg and Dom found themselves at a crossroads with their faith.

“I’ll never forget the day when we came back and attended Citylight in person around Christmas time,” confessed Meg. “The holidays presented just a lot of emotion with the kids. It was horrible. I was trying to take it all back on myself.”

“Early in the year with the pandemic and having gone through the death of some family and friends. Tons of disconnect at work…I finally said I can’t do this anymore.”

“It was ugly and I was ugly,” confessed Meg.

She was convicted of the double life she was living. The life desiring to be faithful to God and the life living on her own and in fear. She knew she couldn’t do both.

“I remember asking the question ‘What am I supposed to do?” Meg admitted. “There’s so much baggage.”

And it was that Sunday where Meg and Dom heard about the baptism class. Pastor Chris did a sermon on surrendering and Dom remembered thinking ‘I’m ready and to give it over to God.’ So they met with Pastor Joe but quickly realized that they would be out of town that weekend in February for one of their daughter’s activities. They were both disappointed but determined to step into this new identity God was calling them into and to be baptized at another time.

The week before baptism Sunday, Meg received notice that their daughter’s activity was cancelled.

“Our weekend got freed up and it was like God showed me the next step,” Dom proclaimed. “It’s like He was saying to me ‘you are going to get baptized.’”

Unsure if they could still be baptized considering they didn’t go through any of the classes, they reached out to Pastor Joe. They confessed their desire to Joe and how God was working in their lives.

“Our image was that sin is washed away through Jesus,” Meg described. “I told Pastor Joe that the day I realized a month ago where I surrendered and decided I am forgiven and nothing matters was the moment. The dunking is only a symbol but a symbol I wanted to do.”

Pastor Joe encouraged both Meg and Dom to get baptized but pressed into them with another question.

“Joe wanted to talk about intimacy and living together,” Meg shared. “I am not Dom’s wife. And given our pasts and the cheating and the lies, Dom and I decided that we did want to surrender it all to Christ.”

So, what was supposed to be a conversation on baptism now also turned to wedding planning.

“It made sense. We should be baptized and married the same day,” Meg shared with thankfulness. “We wanted it to be our special moment in our spiritual transformation story.”

Dom quickly added “being able to do it with Meghan allowed me to publicly share I am faithful to Jesus and to one woman forever.”

And so, on Sunday, February 14th, Meg and Dom were baptized in front of the gathering at Midtown. Two of their children were there to witness their love for one another but most importantly, for Jesus. 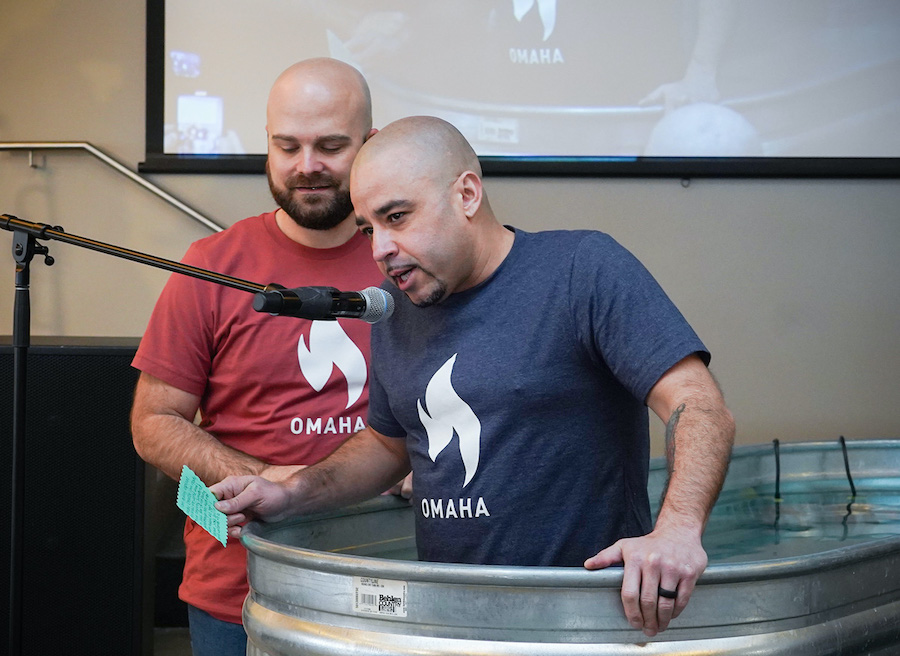 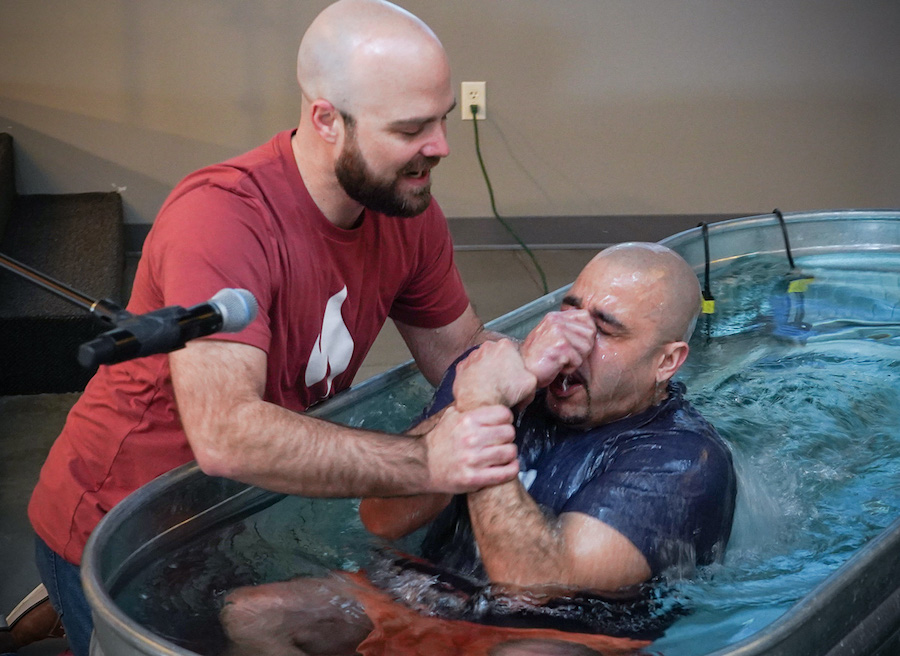 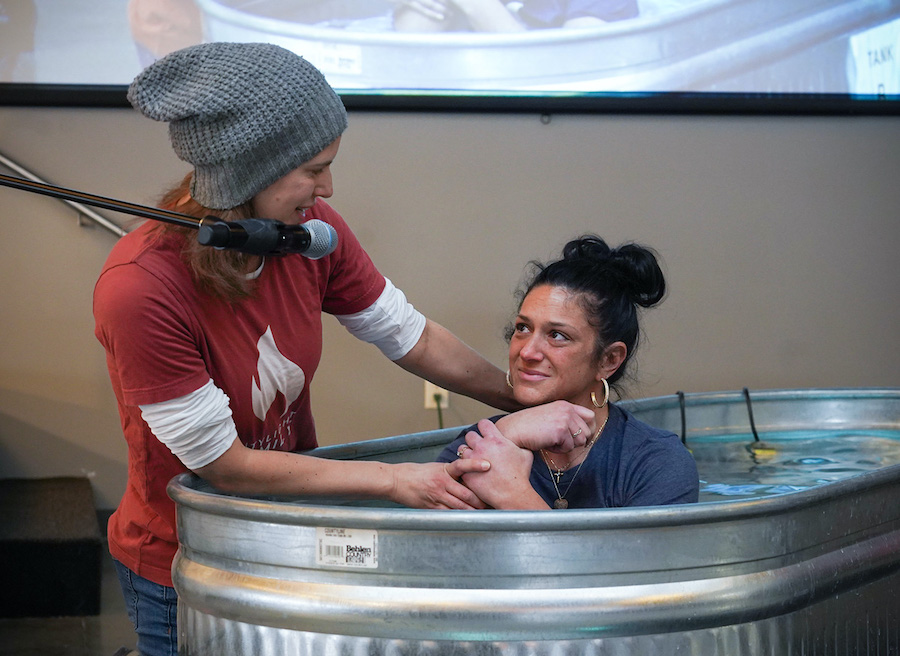 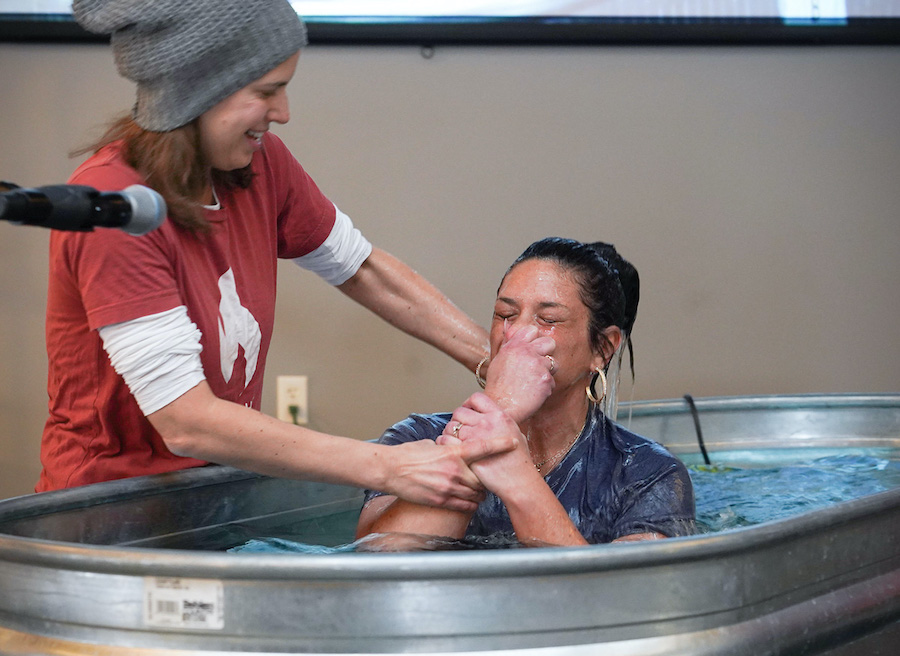 “Our kids have seen us argue and be so ugly,” replied Meg. “And they have seen the dark days. And now I am so blessed they see us loving God.”

After church, when everyone left after the 11 a.m. gathering to go home, or maybe to get a bite to eat with friends, or maybe an afternoon nap, Dom and Meg were married by Pastor Joe. On the same stage they were baptized, they exchanged vows by themselves and took a picture or two from their cell phone. 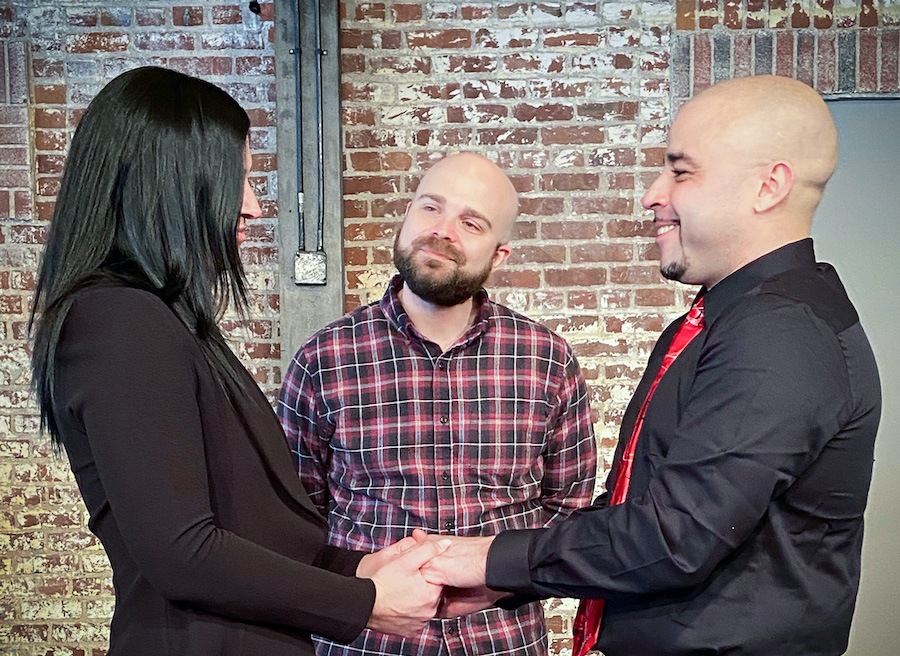 “I am completely in love and full of love,” Dom exclaimed with tears. “The only reason I am alive today is because of Jesus Christ. I now believe there is something more for me.”

“It’s God’s Word through and in me. It’s to partner with Meghan and make disciples.”

Dom continued saying, “her and I together chasing Jesus and chasing each other…sounds like a good time! And then to get married that day. It was cleansing. The unfaithfulness, the fear of the unknown, the fear of commitment, waiting for the ball to drop...that was all gone!!!”

“It’s like I love Dom through Jesus,” Meg described. “Jesus’ love is pouring out of me to Dom.”

After a few moments, Dom was asked one last question; ‘what would you say to the Dom 12 years ago?’ Dom immediately broke down with tears and with serenity he shared,

“I would tell him that God has a bigger plan for you.”

“Though you might not understand who you are and what he has for you…all the hurt and all the pain it will make you who you are. I would also tell him that Jesus is the person that has the control, and he has made you who you are for that reason…embrace it…embrace Jesus and use what he has given you for good.”

Meg was asked the same question and with tears in her eyes she said,

“I would say ‘Meghan you need to let this life go.’ That you are enough for Jesus. You are not for other people or for men. Jesus is writing your story.”

But you are a chosen race, a royal priesthood, a holy nation, a people for his own possession, that you may proclaim the excellencies of him who called you out of darkness into his marvelous light. 1 Peter 2:9

As I listened to Dom and Megan tell their story, I couldn’t help but be reminded of this verse in 1 Peter. Particularly the reference of darkness. Darkness wanted to write a story for each of them that included death, destruction, deceit, and depravity. And the level of darkness they were pulled under and into you can’t help but ask yourself ‘is there any hope for them?’ Where Meg and Dom have been in life and what they had accepted for themselves should have created such permanent despair and separation. The world could have written each of them off as a lost cause. How could anyone be saved from all of that?

However, God promises something entirely different than what our world says.

And another thing. God says each of us have similar stories as Dom and Meg. The people, events, and things in our story might look different, but the same enemies and outcomes all show up and separate us from God.

But Jesus! Only Jesus are we called and given a way out.

Just like in all of us, Dom and Meg have been given purposeful and providential opportunities to see, learn, and to live. They have also been given an understanding that darkness is shattered by light and the identity the world screams at them to believe in, are all lies. Instead, who they are in Christ…chosen, royal, holy, and part of His Light… is the truth.

This is a story of that marvelous light shattering darkness and of a woman and man stepping into their holy identity.

All glory to God!