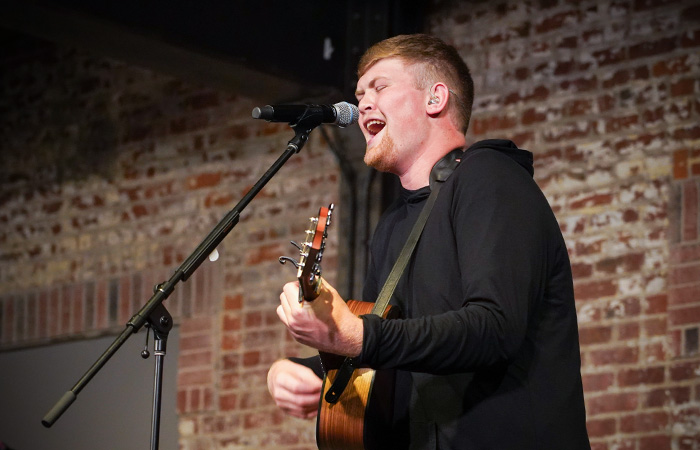 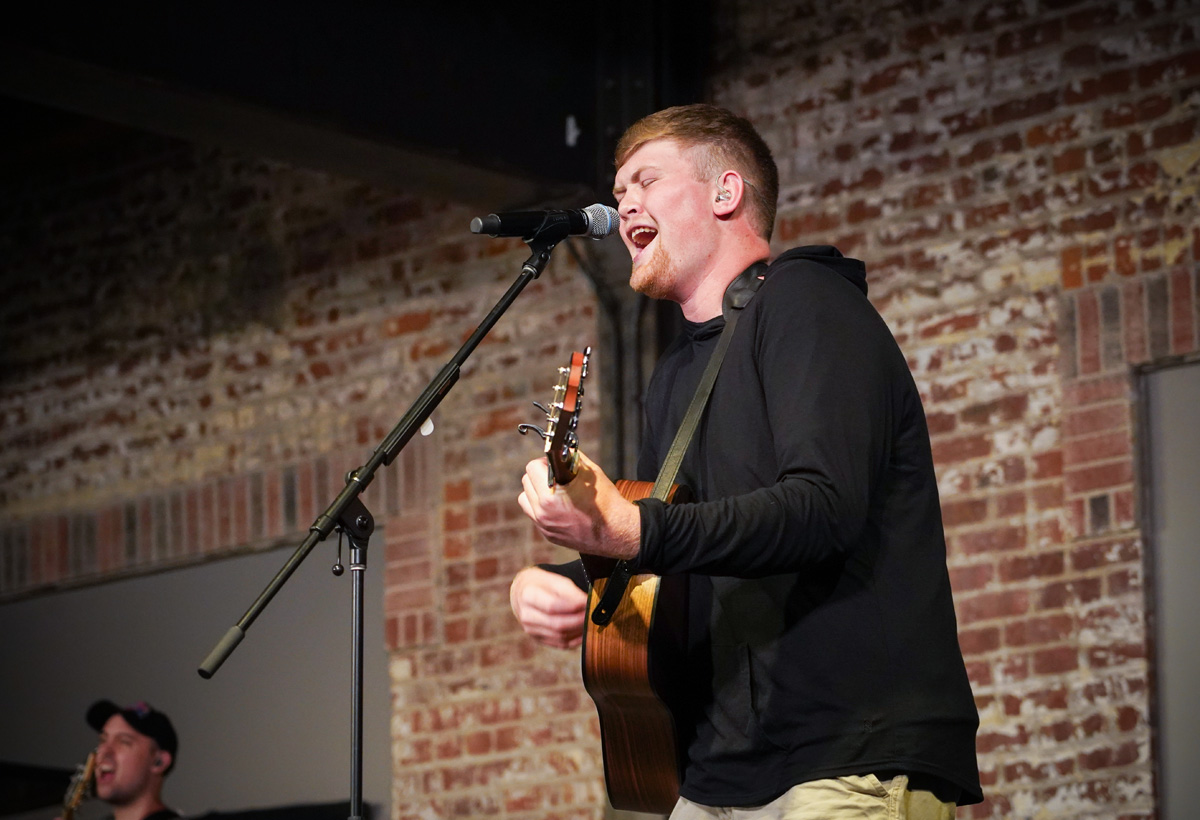 On Thursday nights, Riley Lampman can be found standing in the front row at Salt Company, Citylight’s college ministry, hands raised, eyes closed, singing his heart out, and that’s when he isn’t leading worship. Riley loves music. He loves worship. He loves God. His life did not always look like this. A few years ago, Riley was a little lost. As a senior in high school, he was introduced to the party scene shortly after Saint Patrick’s Day. Up until that point in his life, Riley was the textbook kid from Nebraska. Native to Papillion, Riley went to Papillion La Vista High school, sang in the choir, danced in show choir, and acted in musicals.

“I was the annoying kid that sang all the time, all around the house and it didn’t sound terrible so most of the time my parents wouldn’t tell me to stop. I went to high school and got involved in the show choir. I could sing but I did not know how to dance. I eventually learned and acted in musicals.”

Riley was raised in the Catholic church where he was confirmed as an 8th grader.

After he graduated, a friend of Riley’s brought him to a Lutheran church. Riley loved the music they had there.

“Growing up in catholic school we didn’t really have music, so my first draw to the church was music. It was the reason why I continued to go. When I was out of high school, I didn’t have an outlet to do music anymore, so instead of using it to worship, I used it as an outlet to continue to do what I loved.”

There at the Lutheran church was Riley’s beginning of walking his own path with the Lord. It would take some time before he became a believer.

“At church, no one talked to me about the Gospel, no one asked me about the Gospel, but after that summer they asked me to be a worship leader. Not knowing the Gospel, not knowing Jesus, and not following The Lord, still doing all the things I did in high school, I said ‘yes.’ I was going to the church and leading a student ministry and I didn’t know the Gospel. I just went for the music. I would pray this little, short, tiny prayer before we would start because I didn’t know what to say.”

Riley continued to lead worship throughout his college career. God was pursuing Riley the entire time and used a sunny day on a college campus to bring change to his life. Riley Kilzer, a student at UNO during Riley Lampman’s first junior year, asked him to play ultimate frisbee on Riley L’s first day of school. Using sports as a bonding- a classic Salt Co.- move, Riley K. invited Riley L. into the Salt Company community. 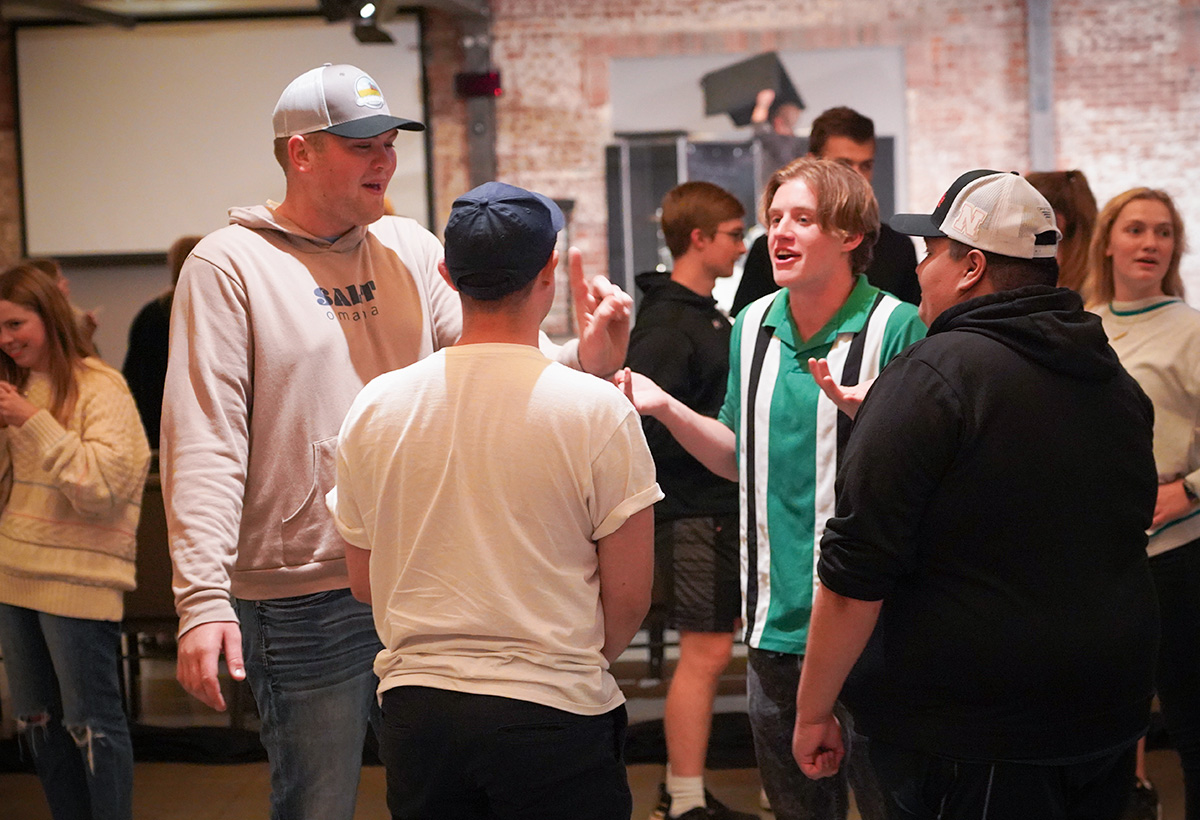 “I was still going through the motions, still partying when I was in a small group one night with Riley K. The guys were sharing their testimonies and I realized that my life did not align with that at all. It made me question what I believed and what I was really there for. Then Riley K. shared the Gospel, and I came to understand what that was. From there, I gave my life to Jesus at Fall Retreat.”

Riley L. attended a session at the annual Fall Retreat where the Gospel was explicitly explained to the crowd of 200 college students. Riley came to a deep and convicting conclusion that he was not living for the right things, and he wanted to change it.

“When I first went to that Lutheran church, I wanted to believe in Jesus, but I didn’t know who He was. When I went to Fall Retreat and saw 200 college students who knew Jesus and had an understanding of Jesus and I saw the way they connected with people, I knew that these people were different, and it was because of Jesus. We had a late-night conversation after the message that night. I went off into the woods by myself and told God that I wanted Him to be my all. I shed a few tears and accepted Jesus right there and then. It wasn’t anything too crazy.” 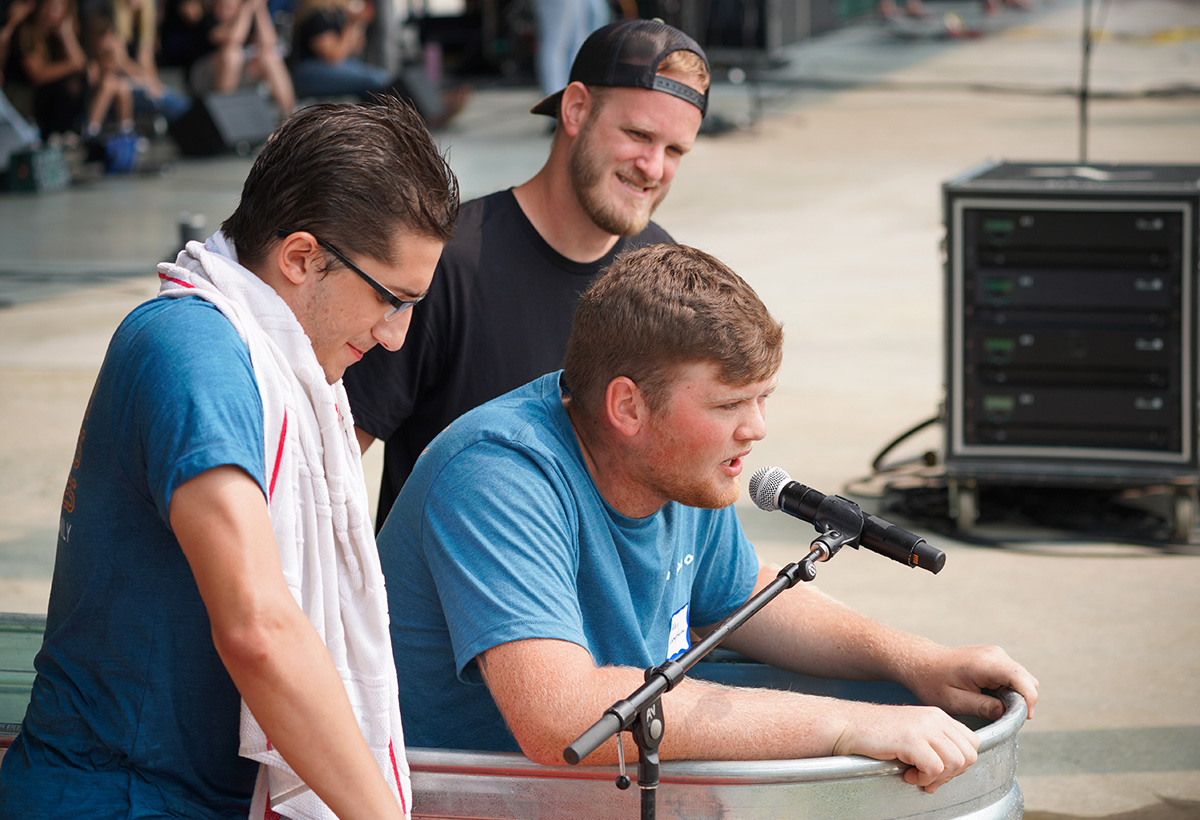 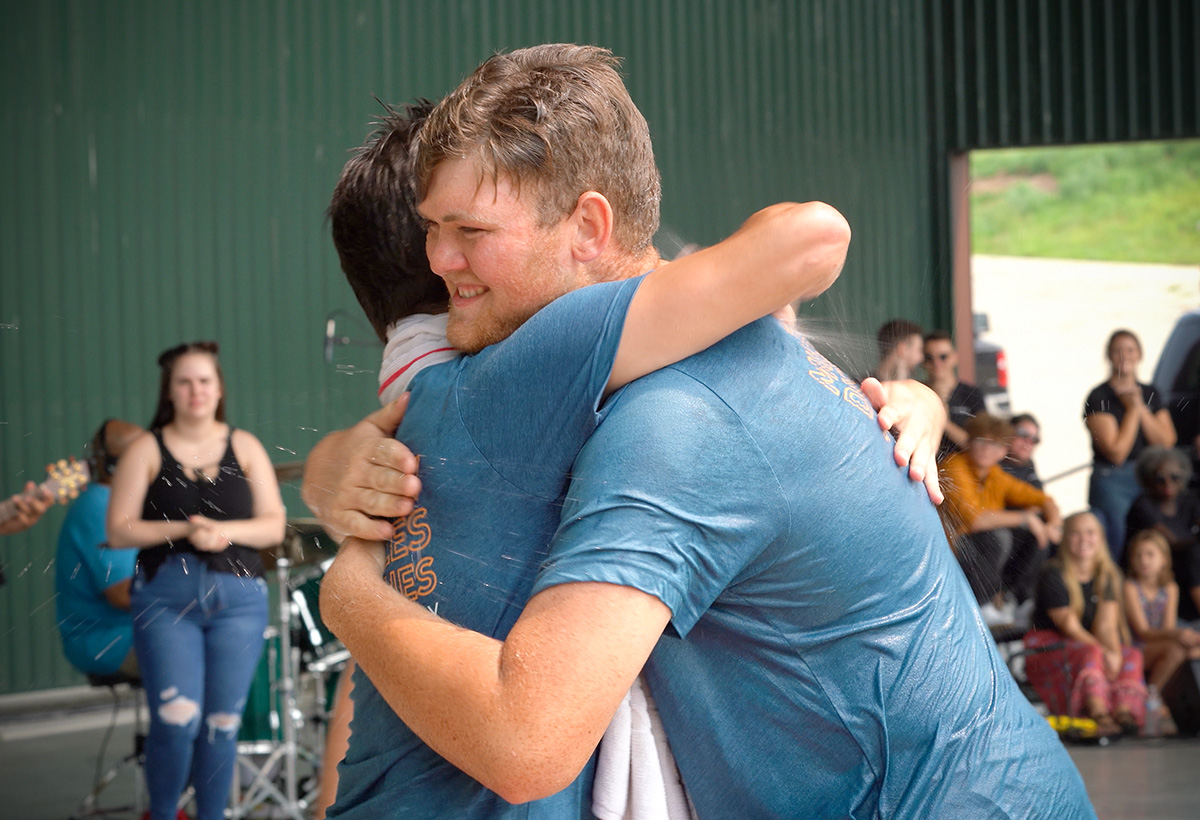 Riley joined the Scott Crossing City Group, a huddle, and eventually the worship team so he could play guitar and sing on Thursday nights. Riley loves being in community. Whether it’s golf, sand volleyball, or just being outside, Riley wants to do it with his friends.

“Salt Co. is the place I found Jesus. It’s a place where different people in the same age group with different stories, pasts, and backgrounds coming together to worship the same God, and to grow together. It’s such an awkward age. It’s the first time college students are out of the house without their parents. Seeing 200 college students from random place and random towns come together on Thursday nights and worship Jesus is something incredible because Jesus pursued them in His own unique way.”

Riley surprised his family by leaving the party scene and joining an evangelical college ministry. Riley feels called to share the Gospel with his family. His sister, through having conversations with Riley and asking “lots of questions, lots of really good questions” came to know Jesus two months ago. Riley smiles as he explains, “To see it from the other side is incredible. Someone was willing to take that time and share the Gospel with me- it’s a joy to share it with someone else.”

As for the future, Riley has some big plans. He and his wonderful fiancé Monykka are getting married this June and moving to Greeley, CO to be a part of the next Citylight church plant. Riley heard about the church plant in Greeley through his huddle with Jonathan Randall, Salt Co. co-director and Greeley’s co-lead Pastor, and immediately felt called to go. 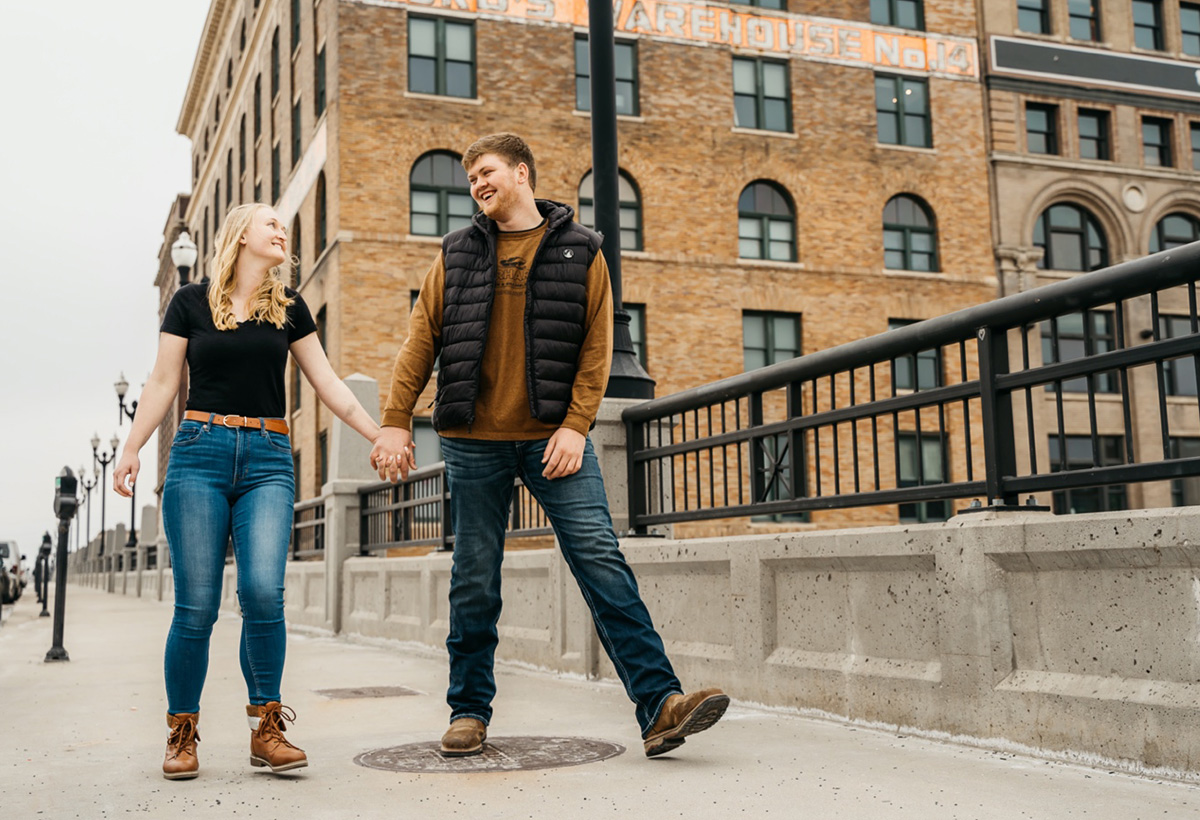 “I have family in Greeley, I have so many people there right now that don’t know Jesus. Through a lot of prayer and some conversations with Monykka, and encouragement through Jon we decided to go. From the ground up God will build his kingdom. We’ll go wherever God is calling us.”

For any college students out there, Riley gives this advice:

“Get involved with college ministry. Read your bible for yourself. Don’t let someone tell you what you believe. College ministry is the perfect place to be. It’s a big family. They are speaking the truth of the Gospel every week, and you are surrounded by people who understand what you are walking through and are dealing with the same sin. People want to know you, they want to know your story, and they want you to know Jesus. Understanding Jesus is the most important thing. There is so much joy in understanding who the Lord is and His love for us.”

For now, Riley will continue to fight the good fight in Nebraska. He summarizes his journey so far using the music that brought him to Christ.

“Now I have a reason to worship. My life is completely changed. I am no longer in the party scene; I have a wonderful fiancé who is also a Christian. I think after you’re saved, you’re constantly being saved, and every day is a process. Every day is taking up the cross and choosing Jesus. And some days we pick up our cross and some days we don’t. It’s recognizing that yes, I’m a sinner and I’m broken, but Jesus paid for all of that, and I can live in His grace. Now I use my gift that the Lord has given me to worship the Lord. It’s so different. Before I sang to sing or please other people but now it’s so joyful. I am filled with joy when I sing. I have a reason to sing. It’s so much more than just a song with notes, it’s a God who is worthy of worship.” 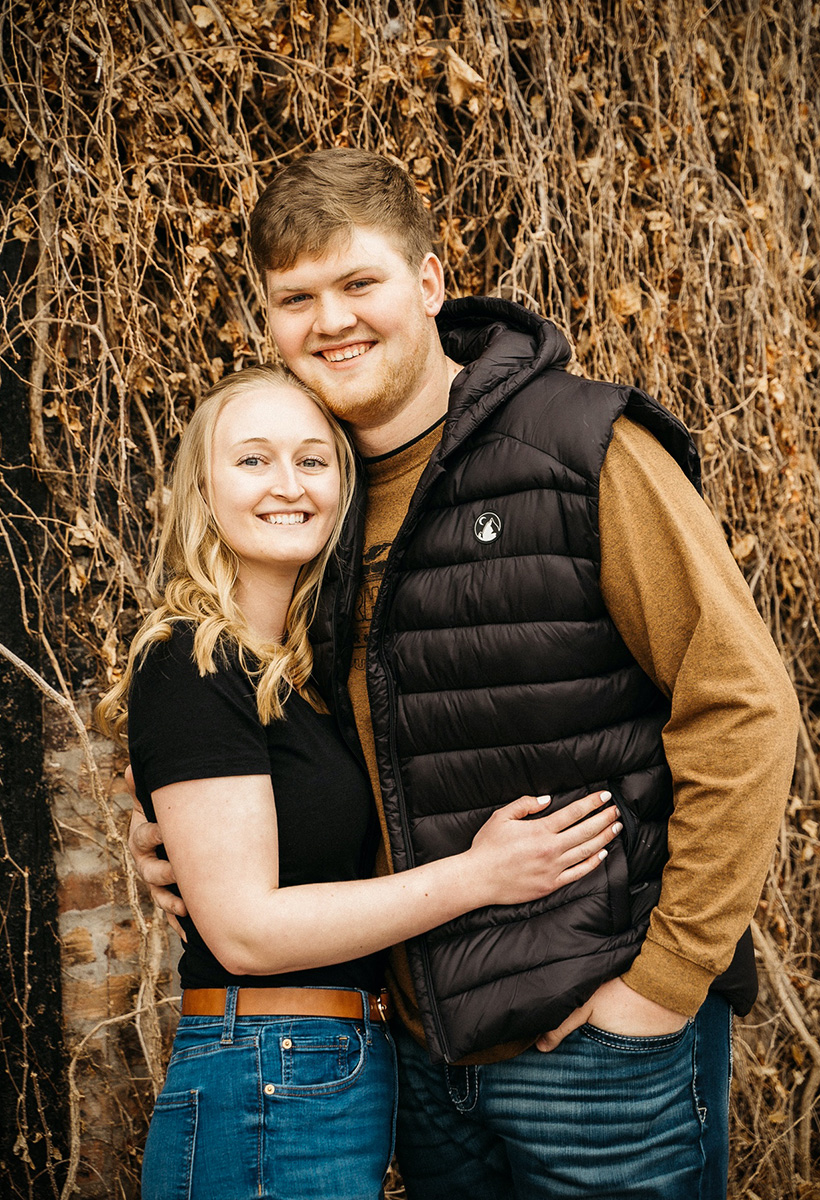